Like 44,000 other UK employers, Michael Cairns outsources his HR and health & safety to Peninsula.

This frees up his time to focus on his plumbing business: Celsius Plumbers.

So, what's currently on his agenda? Boosting staff motivation, plugging skill shortages, and adapting his service around soaring energy costs…

Michael reaps the benefits of a super-engaged workforce thanks to his ‘Star of the Month’ incentive.

“The rules are simple, I don’t get a vote – it’s purely peer to peer.”

His team nominate each other for various efforts, like demonstrating company values or just going the extra mile. And while the incentive took a while to catch on, it now forms a huge part of the company’s culture:

“I had to really push it at the beginning, because it was a new way of working. People weren’t used to it. But now, I have my team asking me if I had received their nominations for the month and when I’m going to announce the winner.”

This gives staff another reason to deliver excellent service, and when Michael shares the feedback, it boosts positivity within the team:

“It’s a win-win. I get to see everyone’s nominations for the month, which is a great insight into individual behaviour.

When I announce the winner, I put it on our team's WhatsApp channel and it’s always great to watch the other team members congratulate the winner. I also take time to privately message the winner and all other nominees to show their efforts don’t go unnoticed.”

As he explains, it’s not always the costly or elaborate schemes that deliver success:

“There’s no financial incentive, that’s not what this is about.  It’s just simple recognition of a job well done." 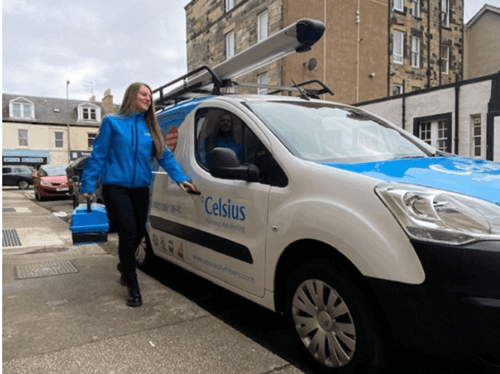 “Now, we have seen a shift in people’s questions regarding energy efficiency in general. How can they save money?”

And, as Michael explains, it’s not always a simple switch to renewable energies. Edinburgh’s architecture will make it even harder for residents to heat their homes:

“Trying to get renewable energies into these historic buildings will be difficult, because of the planning laws, and conservation areas. How do you get an air-source heat pump which sits outside? Where do you put them without making the building look commercial?”

As a response to the rising prices, Celsius Plumbers are focusing their efforts on installing CombiSave valves. This reduces the flow of the water until it gets to the right temperature – helping their clients avoid water waste.

Michael will no doubt need this level of innovation to ramp up as the energy crisis continues. To stay ahead of the curve, he highlights the need for a highly-skilled team:

“There is a skill shortage in the UK, especially with how we’re going to have to be far more energy-efficient. New technologies, renewable energy… we need a skilled workforce to deliver that.”

And his commitment to hiring apprentices allows him to build one…

Apprentices form a huge part of Michael’s business. The scheme offers Michael a way to train up recruits, and then recoup the costs – while giving people a chance to start a new career.

Since starting out, Michael has hired 12 apprentices, with three currently sat on the team.

However, finding willing applicants can often be a struggle. And with funding issues and potential HR headaches, not enough employers participate in the scheme. An ex-apprentice himself, Michael knows first-hand how challenging it can be:

“Back in the early 2000s, when I took my apprenticeship on, the same challenge was there to try and get an apprenticeship. I think I wrote over 300 letters to different businesses”.

This led Michael to join a focus group, encouraging more employers to take part. He also set out a commitment to hire apprentices within his own business. As part of this, he supports apprentices by providing tips and information on their Plumbing Apprenticeships Edinburgh page.

As he explains, the legal contracts for apprentices are different than they are for his full-time engineers. So, he relies on Peninsula to stay up-to-date with the relevant paperwork and guidance at all times.

Michael decided to become a Peninsula client three years ago.

“What first attracted us to Peninsula was the HR software that you use. It just streamlined so many things that were once laborious processes, like sorting holiday requests.

Before, we just had a calendar on the wall. And we took holiday requests by either by phone call or email. But now, staff just do it through the app. It’s just so much easier. You can see any conflicts, you can see how many holidays staff have left over.

And beyond that, Peninsula’s advice means I can sleep easier at night. Because you’re responsible for such a lot of people, you need to make sure you’re doing the right thing by them.”

The average age of employees has increased in recent times. This means more of us are working well into our senior years. Menopause is a health condi

Should you rehire an employee who left your business?

Want to reduce workplace absences by 45%?

Do all staff get time off for the Queen’s funeral?