Wages not paid on time

There may come a time when you’re unable to pay staff wages.

If this happens, you might be wondering about the potential legal action you could face. And all the requirements you need to meet.

Following the correct procedures for late or missed wages is pivotal for your business. Not just for your reputation but for the welfare of your staff. Having a clear method will help eliminate questions like, can I sue my employer for not paying me?

In this guide, we explain the rules for employers paying wages late in the UK. And what to do if you can’t pay your staff.

In UK law, all employees have the right to receive payment for work they provided. Employers have a responsibility to pay their staff on time. So, it can be considered illegal to pay wages late.

Some of the most common types of wages can include:

Is it illegal to not pay employees on time?

Sometimes, employment contracts include a payment date clause. So, an employer not paying on time can be classed as a contract breach. And these wage claims can prove costly.

Legal action against employers not paying salaries can sometimes lead to financial penalties. And compensation can go up to £25,000 for employees who are not being paid on time in the UK.

If you miss payments, like pensions, expenses, and benefits, it’s only considered a legal breach if a court resolves it as one. ACAS unpaid wages states how and where to report unpaid wages.

If an employee thinks they have not been paid their legal wage, they can raise their case to HMRC who will provide legal advice.

What to do if you can’t pay your staff?

You should let staff know about any delays to wages as soon as possible.

You need to determine if being unable to pay wages is a short-term issue, or part of a larger financial problem. And give them information on when to expect their pay.

Staff likely won’t stay for long if they’re frequently not getting paid for work done.

And without them, productivity and success are less likely – forcing redundancies or business closure.

Then discover how to protect your business and follow UK employment law for redundancies. 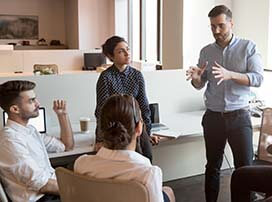 When can you withhold pay?

There are limited times when it’s legal for you to withhold pay from staff. In most cases, it must be stated in the employment contract.

Can an employer withhold pay if you quit without notice?

You must provide your staff with the wages they have earnt. And doing so can lead to employees raising claims at employment tribunals for unpaid wages.

Can an employer withhold pay after termination?

If an employee’s contract is terminated, you no longer have a contractual right to remove any money from their wages.

Any attempt to withhold pay could lead to claims of unlawful deduction of wages.

Can an employer withhold pay for mistakes?

You shouldn’t make deductions to wages unless stated in their contract and have been previously agreed to.

It isn’t considered good business practice to refuse to pay your employees for mistakes. Or punish them through salary deductions. They could decide not to work with an employer who doesn’t pay legal wages.

Instead, follow through with your disciplinary procedure. And investigate the extent of their mistake and how much your business with be affected.

In some cases, you might find you’ve overpaid your workers. When an employee owes an employer money, it could be because of several reasons. But you have right to deduct it if:

The last thing an employee needs is to not be paid correctly by their employer. It’s a good idea to make a payment plan to recover money owed by employers.

The plan should be created with the employee’s agreement. And it’s not advised to simply deduct the payment, just because they didn’t agree with the terms.

Get expert help on avoiding late payment of wages

You should have a strong procedure in place when dealing with contracts and salaries.

Follow the legal procedure on employee wages; allowing you to avoid court hearings, and financial penalties.

Demonstrate a clear procedure to your staff if wages are not paid on time. Legal compliance with UK payroll laws can protect your business from potential disruption.

Get expert advice on building employment contracts with our team today. Give us a call on 0800 028 2420.